How to Eat an Elephant 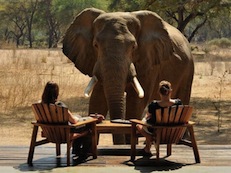 Hint: You're doing it wrong

This is about levels of change. It's partly about hg.mozilla.org vs GitHub (or BitBucket). But it's more about our devt/review/commit process.

Moz-central demands patches that solve significant issues, and it's probably right in wanting this, but this bite size comes with problems.

There are 3 levels of change worth discussing:

The problem with the Mozilla process is that steps 1 and 2 don't exist at all. The benefits to the existence of more detailed change levels are:

In effect we're using GitHub as a tool to develop patches for Firefox, rather than to develop Firefox itself. In some ways I mean this literally.

There are probably reasons why the detail of what works for GCLI might not exactly work in other places, but I'm willing to bet that these ideas could be adapted to be of more general use.

Fundamentally we solve big problems by breaking them down into smaller steps.

I can eat an elephant, but not by opening really wide.