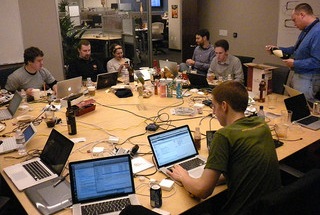 See this recent blog post for context on the new developers command line.

I'm in the process of finishing off bug 724055 which will make it as easy as is possible to create new commands, just set a pref to point to a directory where your commands are stored in JSON (ish) files, and you're done.

In the next few days I'll update this post (Update: see here) with a set of resources for creating commands and ideas for commands. We'll hang out in IRC and crank away and see how many commands we can get written in a day.

If you can spare some time, we'd love to have some help.

Update: Originally this post had a date typo and said the 27th. The real date is the 26th.