Update: Venkman is probably no longer the solution to any problems that anyone still has.

Currently you can't CAN!. See below for update. Previously Venkman (the Javascript debugger) would not install, and if you tried to hack it by downloading the .xpi file, unpacking it, altering the .rdf file to allow it to install, it crashed. 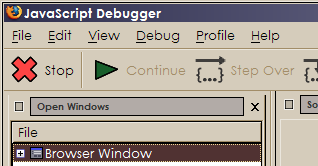 It appears that the issue is lack of interest from the developers in fighting for the attention of Mozilla central.

So I did a bit of digging and I think there is a patch for Venkman that might allow it to work. The patch is attached to this bug.

Has anyone made an installable Firefox plugin using this patch?

Slight side-track: While we are on the subject of Venkman, it is possible to alter the annoyingly huge fonts used in the source windows.

UPDATE: As JR Boyens noted, someone has made an XPI with the patches however it still had the version set to 1.1, so it still wouldn't install. So I had a hack, and while I was at it I reduced the size of the font in the source pane.

I am absoultely not about to start maintaining this thing. DWR is quite enough for me, but like me you might benefit from this quick hack.

You can download the xpi from here. This is a very simple hack so I promise nothing except that this will probably break, make your computer catch flames and then run off with your partner.